Our second day of the competitions went surprisingly well. We began the day by fixing our robot and performed well in some of our matches. We won two of our matches, but ended out being ranked lowly. During alliance selection, we were surprised to be picked as the second robot on the Eighth Seed alliance. Thanks to the Baxter Bomb Squad, the Cel-Techs, and Cougar Robotics for providing an excellent alliance to play with until the semifinals!

This is the teleoperated part of one of our elimination rounds:

Today has certainly been an exciting day! Due to technical difficulties, we left the competition ranked 37 with one win and three losses. Tomorrow, we hope to do better after repairing some problems with amperage and shooter tension.

Be sure to cheer us on tomorrow. Even if we don’t win, we have certainly learned much that will help us next year!

Alliance Selection begins at 12:15 PM
Eliminations will begin at 1:00 PM

Team Neutrino is excited to compete in the off-season competition, Cow Town ThrowDown. Cow Town takes place from October 31 to November 1. At this competition, we plan to give rookie members an experience of what a competition is like in order to be more prepared for the in-season regionals.

We will be keeping our twitter page updated with our match results!

Be sure to cheer us on as you watch the live stream here: 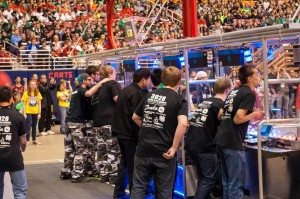 Awesome job to everyone who helped set this event up, and to all the members and mentors who attended! It was so exciting to be able to compete with the teams from Minnesota, Wisconsin, and Iowa!

On Wednesday, we drove up to the house we were staying at and checked in the robot. Thursday we set up the pit, put the robot together with its new arm, and pit scouted the other teams. We were also able to do a couple practice matches, and the team went to Annie’s parlor for a team dinner!

On Friday, we competed in eight qualification matches, seven of which we won. This placed us as the fourth highest ranked team, and first for OPR! We were thankful to be able to scout with team 2175 so we could get information about each team. You can find the results here for the event: http://www.thebluealliance.com/team/3928.

All of us will remember Saturday for years to come! We only won one of our three matches that morning, but we were picked to be on the second seed alliance. It was great to work with teams 4244 and 2169! Our team ended up being quarterfinalists in the elimination rounds, and this ended our chance to go to Championships in April. Or so we thought…

Team Neutrino was the recipient of the MN North Star Engineering Inspiration award! This award means that NASA will pay for our registration so that we can attend champs along with over 400 other teams. Good luck to all who are going!

Thanks to all who stayed updated on Twitter and the Blue Alliance. We will get more information to you later so you can stay updated during Champs!