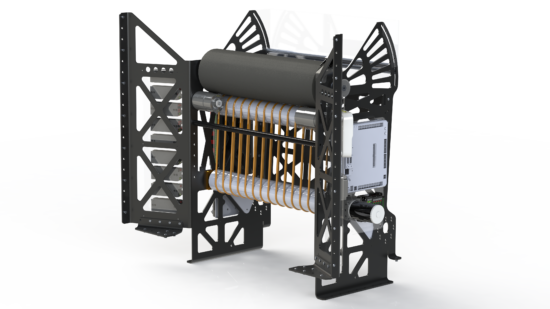 We started prototyping with a one-wheel shooter, but then we decided to use a roller to shoot multiple balls at once and improve the shooting rate. This roller is made out of 80A polyurethane pressed onto a thin wall aluminum tube and then sanded down on the lathe to make it concentric about the axis of rotation. The geometry of the roller maximizes the rotational inertia by placing the majority of the weight as far away from the axis of rotation as possible. The shooter is driven by two 775 Pro motors on a 3:1 belt and pulley system. Pulleys are used because they can efficiently transfer the motors power at high speeds. A beam break sensor senses retroreflective tape on the belt so that belt revolutions can be counted and a constant roller speed can be maintained. We had issues with the shooter polyurethane moving relative to the aluminum when it was spinning, so we continued to prototype. The roller was replaced by a shaft with 7 Colson wheels as a more accurate solution. Initial testing with the Colson wheel shooter was promising. Ultimately, however, it was determined that the roller shooter was more accurate once we pinned the polyurethane.