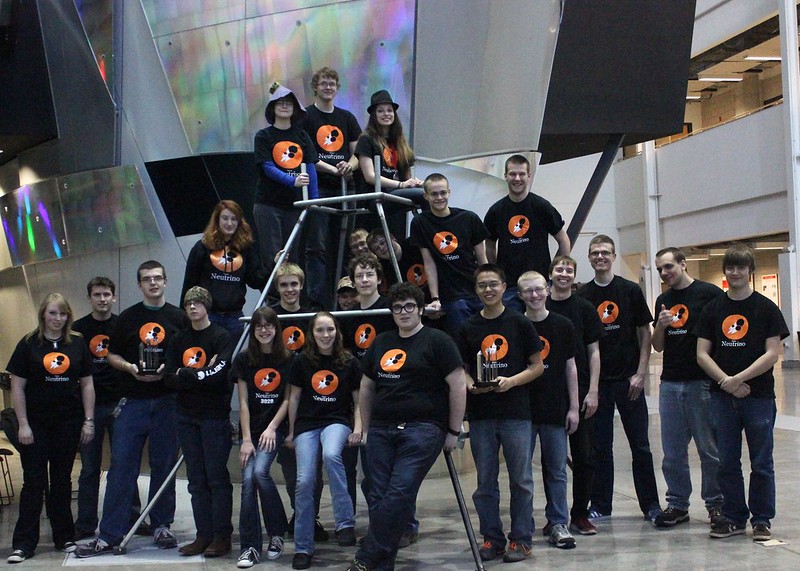 Minneapolis, MN – Story County’s 4-H FIRST Robotic Competition (FRC) Team Neutrino attended the North Star FIRST Robotics Competition Regional at Mariucci Arena this past weekend. The team of high schoolers designed and fabricated a robot to complete the challenge of retrieving and shooting Frisbees into goals almost 8 feet in the air and climbing a 7 ½ foot pyramid during the regional competition.
Team Neutrino finished with a 13-2-0 record. They won the Innovation in Control award for their work with programming a 7 disk autonomous mode, which utilized their utility arm to pick up an additional 4 disks and shoot 7 disks during the 15 second period where programming controls the robot.
On Saturday, they finished qualifications seeded first. They selected Team 2574 Robo Huskies from Saint Anthony Village, Minnesota and Team 4239 WARPSPEED from Willmar, Minnesota. They continued undefeated up until the second finals match, when they lost by 8 points because their robot suffered a blow to their pneumatics system that took out their scoring mechanisms, making them lose the last 2 finals matches of their season.
Even though Team Neutrino suffered a tragic loss at regionals, they are still proud of all their accomplishments, awards, and new friends they have made this year. The team would like to invite you to visit them at their upcoming outreach events such as VEISHEA, which can be found at www.teamneutrino.org/events.
To learn more about Team Neutrino visit www.teamneutrino.org or contact our coach Tony Milosch by email [email protected] For additional Story County 4-H program information visit www.extension.iastate.edu/story or contact Mary Wilkins, County 4-H Youth Coordinator, by phone 515-382-6551 or email [email protected]
Iowa State University Extension and Outreach programs are available to all without regard to race, color, age, religion, national origin, sexual orientation, gender identity, genetic information, sex, marital status, disability, or status as a U.S. veteran.