We arrived in Minneapolis on Wednesday night and began the North Star competition on Thursday morning. After setting up our pit, we reassembled our robot and began to make some improvements that we had created since Central Illinois. We added a new tote ramp and improved our recycling container intaking. Our team did a great job working hard, so didn’t miss any practice matches. On Thursday, the scouts practiced scouting using our new scouting database.

On Friday, we completed our eight qualification matches. Despite a communication problem in the first match that left us immobile, we ended the day with a strong ranking. In addition, we had a great performance by our Chairman’s Award presenters. All of our pit representatives did a great job talking to judges.

After three qualification rounds, we were ranked 7th with an average score of 68.70. We were selected by 3883 Data Bits and selected 5339 Hurricanes to play with us in the playoffs. We were excited to get the opportunity to play with them! We added a center step recycling container grabber to our robot for the playoffs. 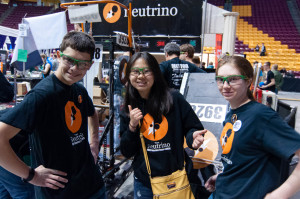 After two high scoring rounds, we were eliminated in the playoffs. Despite this, we had a great time watching the other teams rack up exceptional scores. In the awards ceremony, our vey own Dagney Paskach won the Deans List Finalist award! Congratulations to fellow Iowan teams 5576 Terminator and 967 Iron Lions for their awards and qualification to the World Championship.