Thanks to ISEK, Team Neutrino was able to have an outreach booth during this year’s FLL Championship at ISU. This event was very successful for us. We were almost constantly giving mini presentations to FLL teams and the general public who decided to stop by and see what Team Neutrino was. The kids really enjoyed being able to catch the frisbees that were shot by last year’s robot, and also had the chance to see what comes next after FLL. 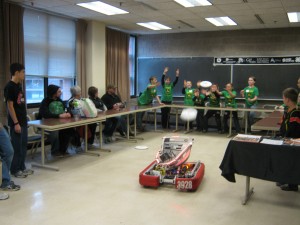 Congratulations to all of the FLL teams that made it to state!