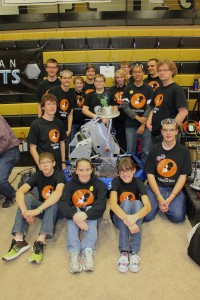 Ames, Iowa – Story County’s FIRST Robotic Competition (FRC) 4-H Team Neutrino will host an open house on Monday, February 18 at 7 pm in Howe Hall Atrium on the ISU Campus to reveal the robot they designed and built to compete in this year’s FRC Challenge, Ultimate Ascent. The 120 pound robot that will compete in the competition that will retrieve and shoot frisbees into goals almost 8 feet in the air and climb a 7 ½ foot pyramid among other things during regional competitions located in Minneapolis and Kansas City in March.

About the 2013 Ultimate AscentSM challenge
The 2013 game, ULTIMATE ASCENT, is played between two Alliances of three teams each. Each Alliance competes by trying to score as many flying discs into their goals as possible during the two-minute and 15-second match. Discs scored in higher goals score Alliances more points. Matches end with robots attempting to climb up pyramids located near the middle of the field.

About FIRST®
Accomplished inventor Dean Kamen founded FIRST® (For Inspiration and Recognition of Science and Technology) in 1989 to inspire an appreciation of science and technology in young people. Based in Manchester, N.H., FIRST designs accessible, innovative programs to build self-confidence, knowledge, and life skills while motivating young people to pursue opportunities in science, technology, and engineering. With support from three out of every five Fortune 500 companies and more than $16 million in college scholarships, the not-for-profit organization hosts the FIRST® Robotics Competition (FRC® ) for students in Grades 9-12; FIRST® Tech Challenge (FTC® ) for Grades 7-12; FIRST® LEGO® League (FLL® ) for Grades 4-8; and Junior FIRST® LEGO® League (Jr.FLL®) for Grades K-3. Gracious Professionalism® is a way of doing things that encourages high-quality work, emphasizes the value of others, and respects individuals and the community. To learn more about FIRST, go to www.usfirst.org.

FRC is an annual competition that helps students to discover the excitement of science, technology, engineering, and math (STEM) and the rewards a career in STEM can bring. Approximately 51,000 high-school students from 16 countries will participate in the 2013 competition.

In 1992, the FIRST Robotics Competition began with 28 teams and a single 14-by-14-foot playing field in a New Hampshire high-school gym. This season, a projected 2,550 teams – including 375 rookie teams – will participate. Fifty eight Regional competitions in the U.S., Canada, and Israel, plus 17 District competitions, one State Championship, and one Region Championship will culminate at the 2013 FIRST Championship at the Edward Jones Dome in St. Louis, April 24-27. FIRST programs are spearheaded by more than 120,000 dedicated Volunteers worldwide, most of them professional engineers, scientists, and teachers who mentor the next generation of innovators.

NOTE: A public information flier can be downloaded here.

Media Note: Please let us know if you are planning on attending our open house event. The 2012 Rebound Rumble – Team Neutrino photo can be found here.